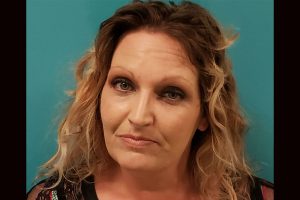 Sonora, CA –A Sonora woman fleeing a local grocery store after being accused of shoplifting, police say then backed — three times — into a woman blocking her vehicle.

On Thursday evening, Sonora Police report a clerk at the lower SaveMart store located at 130 Stockton Street confronted a shopper, 41-year-old Stephenie Turpen, for attempting to steal some groceries. Turpen left the items and then fled the store, jumping into a silver Chevy Cruze. That is when another woman, who had witnessed the crime, stood behind the car to blocked Turpen from leaving.

Instead, police say Turpen backed up into the woman three times, almost running her over. Turpen continued to drive away when officers blocked the store’s entrance, preventing her from escaping. Luckily, the other woman was not hurt.

During questioning, Turpen admitted that she saw the woman behind her vehicle but backed up anyway.  She was arrested for assault with a deadly weapon, attempted petty theft, and for a felony and misdemeanor warrants. Sonora Police ask citizens not to put themselves in unsafe situations when witnessing a crime and advise calling 911 instead.