Stockton Man Tased After Vandalizing Room At A Sonora Inn 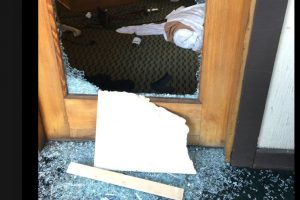 Sonora, CA – A Stockton man had to be tased after throwing items, including the bed mattress, and breaking a window at a Sonora Inn.

Sonora Police were called to the Heritage Inn on South Washington Street around 4:30 a.m. on Thursday for a report of a guest screaming and breaking items. Chief Turu VanderWiel relays that when an officer arrived at the room suddenly its front door window was broken out from inside.

With a Tuolumne County Sheriff’s Officer called in for back up, the next half hour was spent trying to get 30-year-old Robert Thomas Geyer to exit the room, reports Chief VanderWiel, who recounts, Geyer had pulled apart the bed’s mattress. He details, “He had the pad portion of it up against the wall. He wasn’t barricaded behind it that we could tell… Officers were able to get a shot on him with the taser and take him into custody.”

Geyer was booked for felony vandalism and for being under the influence of a controlled substance, but the exact drug was not identified. As the image box pictures show there was a lot of damage to the room, but the Chief did not have a total amount.

VanderWiel added that Geyer was not supposed to be here, sharing, “He told the officers he was just here to get out of Stockton, so based on that information he was in our area without essential business. Obviously, that is against the governor’s stay-at-home order.”

The Chief also relayed that Geyer’s crimes were not considered a violent or serious crime to others, so he will be released under the coronavirus zero bail rules.