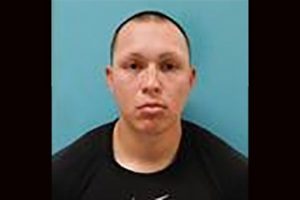 Responding to Clarke Broadcasting via email on Wednesday afternoon, DA Barbara Yook relays that the three fresh charges further described in the story below against 25-year-old Ian Gabriel Canastra Christiansen relate to a second case alleging acts of felony domestic violence against a different victim over the time period between March and July of 2018.

She adds that after he was arrested and booked into Tuolumne County Jail on that warrant with the $200,000 assigned bond he posted bail.

Original Post at 12:55 p.m.: San Andreas, CA — New charges are pending in the case of a correctional officer accused of domestic violence.

According to the Tuolumne County Jail custody report, on Wednesday just before 10:30 a.m., 25-year-old Ian Gabriel Canastra Christiansen, now listed as having a Valley Springs address, was booked on fresh felony charges of inflicting corporal injury, assault with a deadly weapon not a firearm using force likely to cause great bodily injury, and false imprisonment. He was assigned a $200,000 bond.

Calaveras County sheriff’s officials acknowledge that they received information that morning from the District Attorney’s Office regarding a new arrest warrant for Christensen and deputies assisted the DA’s investigator with serving the warrant around 9 a.m.

As reported here, on April 9, Christiansen, who had a San Andreas address at the time, was booked at Tuolumne County Jail on an $80,000 bail, which he subsequently posted.

At the time he was charged with a single count of assault with a deadly weapon not a firearm using force likely to produce great bodily injury in conjunction with an incident that occurred sometime last year in March.

Two days before his jail booking, the Calaveras County Sheriff’s Office released information, not identifying the officer, but stating the related incident occurred while the suspect was off-duty and that information about it only became known to them in March. Officials added that the case was immediately turned over the DA for investigation to avoid any potential conflicts of interest.

When the DA’s Office informed the sheriff that it had investigated and would be prosecuting the case, Christiansen was immediately placed on administrative leave and ceased working at Calaveras County Jail.

Clarke Broadcasting reached out to sheriff’s officials, who are referring all questions to the DA’s office. A request for more information pertaining to the case is pending with District Attorney Barbara Yook.