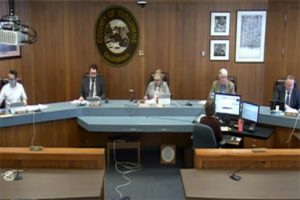 Sonora, CA — The board of supervisors in Tuolumne County will need to make some significant cuts as part of the fiscal year 2020/21 budget that takes effect on July 1st.

We reported last week that Tuolumne County is projecting a shortfall between $6-7 million. Tuolumne County was already projecting a $3.5-million shortfall after-tax measures P and Q failed to gain support in March. Today, staff advised the numbers are grim with the biggest loss in tax revenue for the county coming from the lack of tourists visiting area hotels due to COVID-19. They used the graphic below to show the extent of the estimated revenue losses with TOT down an estimated 45 percent.

County Auditor-Controller Debbie Bautista shared, “I believe it’s going to be 12 to 24 months before we get back to normal in the tourism industry.” To which District Five Supervisor Karl Rodefer responded, “We’re never going to recover that (revenue) this year and only partially next year.”

The county is also projecting a 10 percent loss in sales tax revenue, due to non-essential businesses being closed.

Options presented to the board include closing facilities like the juvenile hall and the various libraries, cutting recreation services, reducing the Visitors Bureau contract, furloughing or laying off workforce, salary freezes, benefit reductions, and eliminating programs that are not state-mandated. The juvenile hall was targeted by District 3 Supervisor Anaiah Kirk for possible closure to save around $400,000 in operating costs instead of cutting other services like libraries, which he noted impacts about 10,000 residents/users.

“I cannot go after something that touches tens of thousands of kids when we have a facility that is housing eleven kids, and the operating cost is that high…I’m not going to affect thousands of kids’ lives for the sake of those eleven,” stated Kirk.

The county counsel, Sarah Carrillo, noted that there are strict rules regarding the juvenile hall contract with the state and noted that if the county decides to close the hall it could be liable for the entire cost of construction, to a total of $16 million. Supervisor Rodefer suggested working with the state to help with funding and making it a regional facility.

There was also talk of putting a new TOT question on the ballot, but it was decided that would be for a much later date, as it would not help the immediate budget shortfall.

Additionally, only one public comment was made, and it was regarding keeping libraries open.

The discussion then turned to board directions to the staff regarding the possible cuts. There are still unknown funding issues related to the COVID-19 crisis, and whether Tuolumne County will receive related additional state or federal funds, as staff outlined in the graphic below:

Board Chair and District 1 Supervisor Sherri Brennan voiced concerns that no decisions can be made without all that fiscal information. “We really need to know what is going to happen with the current legislation that is out there before we can really address this,” stated Brennan.

Worried that no time can be wasted as the fiscal budget needs to be solidified by June, Bautista offered a two-prong approach with a list of possible cuts assuming state or federal funds are made available to the county, and another if there is little or no money. It was an idea the board welcomed.

District 2 Supervisor Ryan Campbell gave his bottom line, stating, “The elimination of services and layoffs should be the last thing we consider.”

The supervisors will discuss the budget issues further at upcoming meetings. Click here to view the budget review for this year and the 2020-21 fiscal year provided by the county.