PG&E Head To Step Down 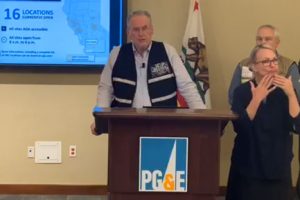 Sonora, CA – The head of PG&E Corporation is leaving that post in June.

Just 14 months after the nation’s largest utility hired him, CEO Bill Johnson will step down from his job. The announcement comes as the utility tries to push through its plan to emerge from bankruptcy. The company’s financial troubles were triggered by billions of dollars in losses from deadly wildfires ignited by its decaying electrical equipment.

During PG&E’s power shutoffs last year, Johnson played a key role at press conferences updating the public on the massive outages and fielding reporters’ questions, as seen in the picture in the image box.

The utility was being pressured by California officials to oust the entire board, including the 66-year-old Johnson. He instead announced his retirement and will depart from the company on June 30. While Johnson’s departure was not part of the company’s bankruptcy plan, it clears the way for PG&E to bring in a new leader that government officials will hopefully see as better qualified.