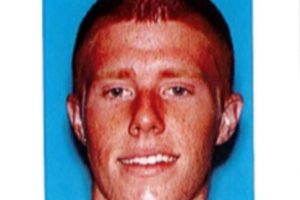 Sonora, CA – Anyone who recognizes the man in the image box is asked to call Sonora Police in hopes they can bring him home to his family.

Bryce David Laspisa was just 19 years old when he suddenly went missing while returning from Placer to Orange County in August of 2013. He was last seen in Kern County on the 30th of that month just after 2 p.m. driving a beige 2003 Toyota Highlander. It was located in the Castaic Lake area off Lake Hughes Road, but Laspisa was nowhere to be found.

Inquiring how Sonora Police became involved in this case, Clarke Broadcasting contacted Chief Turu VanderWiel who explained, “The parent received information that someone matching the description of their son was at a homeless camp possibly in the area of Sonora. They wanted us to check on it, so we figured if there’s a possibility that this person is in our area that we’ll be on the lookout for him and see if we can’t reunite this person with their family.”

While Laspisa would be 26 now, when he disappeared, he was 19 and described as 5’11” tall and 170 pounds with red hair and blue eyes. He had a large tattoo of a Taurus bullhead and his birthday in roman numerals on his left shoulder, as can be seen in the picture below.

Officers have not been sent out to area homeless camps to search for Laspisa. Instead, the chief is hoping that putting the word out to the public can help in that effort. Although VanderWiel knows this is a long shot, he says it is still worth a try.

“You can always hope. You never know. People are missing for years sometimes. Whether they just want to be missing or lost maybe or having some mental problem,” acknowledges Chief VanderWiel. He continues, “We don’t have any history on this person, but certainly if there’s a possibility that he’s in our area, we would like to help figure that one out.”