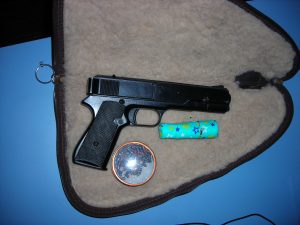 Sonora, CA — An assault is still an assault even when the weapon turns out to be a fictitious firearm.

According to Sonora Police, a local man, 28-year-old Corey A. Ross, was arrested early Monday evening following a Friday night incident at a homeless camp near Lowe’s during which he allegedly threatened and pistol-whipped another man with the weapon.

Officers responded just after 8 p.m. after receiving a report of the assault and met with a 34-year-old male victim. The man said Ross pulled out a semi-automatic pistol, hit him in the head, got on top of him and cocked the weapon. The victim added that Ross pointed the weapon into his victim’s face, neck, and abdomen while threatening to kill him.

Police state that the victim sustained non-severe injuries, adding that he and the suspect are known to each other and the altercation reportedly started over accusations of theft. Although officers checked the area for Ross they were unable to locate him or his vehicle and subsequently released a “be on the lookout” (BOL) alert for him and his blue and white Ford van.

Officers spotted the van Monday at Rotary Park on Woods Creek Drive, located Ross, took him into custody, and also found a metal frame slide action pellet gun that was believed to have been used in Friday’s assault. He is charged with assault with a firearm on a person, threatening a crime with intent to terrorize, and exhibiting a firearm.

Police add that Ross was in the company of 28-year-old Michael A. Ramos of Jamestown, who although not a party to the original battery investigation, was arrested on two outstanding felony warrants.