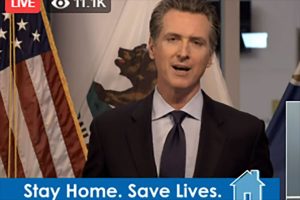 Sacramento, CA – It may be the first U.S. death of a person under 18 from the coronavirus after a Los Angeles County area teen dies as a result of the virus.

The youth lived in the Mojave Desert city of Lancaster, north of Los Angeles. In a live address from Governor Gavin Newsom this evening, relayed condolences to the family and called it a sobering reminder that anyone can be infected.

“Young people can and will be impacted. In fact, young people disproportionally are the ones testing positive in the state of California. Fifty percent of the 2,102 individuals that have tested positive are between the age of 18 and 49.”

This tragic death says Newsom is a reminder for everyone to take coronavirus seriously. A tally by Johns Hopkins University on Tuesday found California coronavirus cases have topped 2,500, with at least 50 deaths.

The state prison population has also reported one inmate and five employees have tested positive for the coronavirus with some calling for corrections officials to begin releasing some of the state’s 123,000 convicts early. Newsom also made it clear that he has ruled out releasing violent inmates in response to the coronavirus pandemic, stating. “I have no interest and I want to make this crystal clear in releasing violent criminals from our system. And I won’t use a crisis as an excuse to create another crisis.” However, he left the door open to other relief that he said needs to be carefully weighed to avoid worsening the state’s homelessness crisis.

The governor also signed an executive order to reduce the risk of COVID-19 in state prisons and juvenile facilities. It directs the California Department of Corrections and Rehabilitation (CDCR) Secretary to temporarily halt the intake and/or transfer of inmates and youth into the state’s 35 prisons and four youth correctional facilities. Those inmates and youth will remain in county custody for the next 30 days.

Newsom also addressed President Donald Trump’s recent statement that he wants the country “opened up” by Easter, stating, “Based upon the curve [of people infected] we have a lot more work to do. We went forward with those stay at home orders for our seniors earlier on in this process, so we’re trying to bend that curve, but we haven’t bent. April would be misleading to represent, at least for California.”