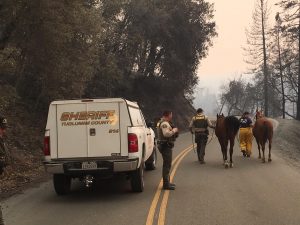 Sonora, CA — The company Pacific Gas and Electric announces that it will plead guilty to 84 counts of involuntary manslaughter in connection to the 2018 Camp Fire in Butte County.

In addition, the company will plead guilty to one count of unlawfully starting a fire.

According to the Associated Press, CEO Bill Johnson released a statement reading, “Our equipment started the fire. Those are the facts, and with this plea agreement we accept responsibility for our role in the fire.“

As part of the plea agreement with the Butte County District Attorney’s Office, PG&E will pay a maximum fine of $4-million and help fund efforts to restore access to water for residents impacted by a canal that was destroyed by the fire.

The Camp Fire killed over 80 people and decimated the town of Paradise.