Ready Or Not Spring Arrives Thursday 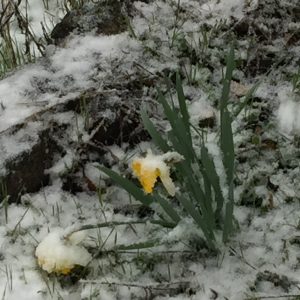 Sonora, CA – Weather permitting or not, the earliest Spring in 124 years will shortly be sprung upon us.

Astronomers say that the occurrence of the vernal equinox, which marks the beginning of spring in the Northern Hemisphere (and fall in the Southern Hemisphere) will happen Thursday, March 19 at 8:49 p.m. Pacific Daylight Time.

Leap years, including the one in the year 2000, and daylight savings time are both contributing to the earliest spring arrival in the contiguous U.S. for nearly a century and a quarter. February having an extra day in 2000 slipped the equinox back a day to March 20 from March 21.

Cooler than normal temperatures and the probability of more rain and mountain snow in the coming days are contributing to a less spring-like feel to its arrival. Forecasters share that with the exception of scattered showers mainly over the mountains on Thursday, mainly dry weather will prevail through the first half of the weekend after which more precipitation will hit the region from late Sunday through the middle of next week.

For those wondering what this past weekend’s storms might have contributed to this season’s concerning meager snowpack, according to the statewide summary, the average snow-water equivalent is currently about 13 inches – or 46 percent of normal for this time of year. Ahead of the storm system, the average snow-water equivalent was reading 38 percent of normal.

The latest readings on the National Drought Monitor map are due to be updated tomorrow. As of March 12, most of the state was considered as experiencing abnormally dry conditions with sections including parts of the Mother Lode showing signs of moderate drought.