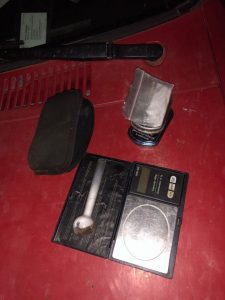 Sonora, CA – K9 Zeus and his partner in tandem with a late-night patrolling deputy busted an alleged drug dealer after he literally went over the line, double-yellow lines in fact.

According to Tuolumne County Sheriff’s spokesperson Deputy Nicco Sandelin, last Friday evening, around 10:30 Deputy Hammell was patrolling the area of Ferretti Road in Groveland when he watched a pickup truck travel into the oncoming lane and immediately conducted a traffic stop.

He contacted the driver, 48-year-old Christopher Bird of Groveland and was subsequently joined on the scene by Deputy Lee and K9 Zeus, who conducted a sniff of the vehicle that resulted in Zeus alerting to the presence of a drug odor inside. A search turned up several grams of methamphetamine, a working digital scale and drug paraphernalia that were hidden inside the truck.