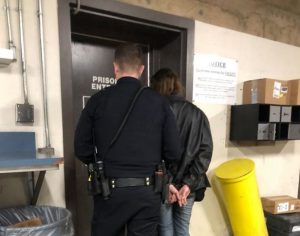 Sonora, CA — The Sonora Police Department reports that a 39-year-old Columbia woman was arrested for a variety of charges after being pulled over for having expired registration tags.

Since Teresa Abreo was on probation, the investigating officer decided to search her vehicle. The PD reports, “The officer located a loaded .22 caliber Derringer pistol. Abreo had previous felony convictions that prohibited her from possessing firearms in California.”

In addition,”Abreo was subsequently arrested for being a felon in possession of a firearm and was transported to Tuolumne County Jail for booking. Other charges against Abreo include having a loaded firearm in a public place and displaying false evidence of registration.”

The arrest happened Saturday evening at around 9pm.