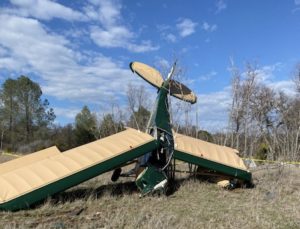 Columbia, CA — The Tuolumne County Sheriff’s Office has released the name of the pilot who was injured in Saturday’s plane crash in Columbia.

Deputy Nicco Sandelin says, “The pilot of the aircraft was identified as 78-year-old William Johns of Lodi, California. He had lost control of the aircraft while attempting to land at the Columbia Airport, causing him to crash the aircraft. Weather may have been a factor in the crash. William sustained moderate injuries and was transported for medical treatment. The FAA did not respond due to the level of injuries sustained.”

The crash occurred shortly before two o’clock on Saturday. Johns was the only person in the aircraft. It also caused a 30-gallon fuel spill in which the Tuolumne County Environmental Health Department responded to help clean up.

Click here to view an earlier story from the weekend.