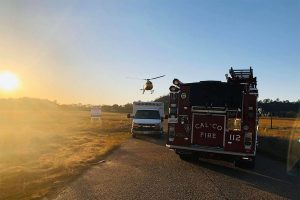 Valley Springs, CA — Calaveras County Sheriff’s are actively investigating a shooting that happened last night in the Valley Springs area where the victim was flown to a Modesto hospital with non-life-threatening injuries.

The initial call that came into dispatch just before 5 p.m. reporting a male victim with a gunshot wound to his upper arm at a residence in the 3100 block of Hagen Road, north of Highway 26 and the La Contenta Golf Club. Sgt. Greg Stark tells Clarke Broadcasting, “The shooting did not happen at the residence. That is where the victim met emergency medical staff.”

Detectives were dispatched and Sgt. Stark relays that all persons involved in the shooting were contacted. He says the investigation is currently ongoing.

The Calaveras Consolidated Firefighters reported on their Facebook page that they assisted in the medical treatment of a shooting victim in Valley Spring, stating that he was flown from outside a Mobile gas station on Vista Del Lago in Valley Springs.

Sgt. Stark would not release any further details but noted that additional information would be released later today.