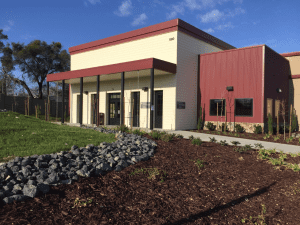 Angels Camp, CA – The long-awaited grand opening of a nearly $8 million health care complex was graced in equal parts by a bright sun, recounting of promises made and kept — and a surprising pledge.

Several speakers addressed the sizable audience who turned out Wednesday morning ahead of the ceremonial ribbon cutting for the 10,000 square-foot James Dalton Medical Office that culminated with much enthusiasm and assistance by Calaveras Chamber of Commerce (CCC) and Angels Camp Business Association (ACBA) members.

Making a timely appearance in the wake of the Feb. 1 Dignity Health-CHI merger to become CommonSpiritHealth, a $29 billion system with a footprint in 21 states, Central California Division President Jon VanBoening was clearly in a celebration mode, lauding the big day in kidding contrast to posted signs he remembered back in 2013 about the clinic “coming soon” to the area.

As if to reassure and remove any doubts in the audience as to his company’s long-term commitment to Calaveras County, VanBoening emphatically pledged that moving forward, CommonSpiritHealth is solidly invested in the future of the region’s rural health care system with much more to come. The newly merged company with a focus on “bringing the expertise of a national health care system to neighborhoods across the country” constitutes the largest not-for-profit hospital in the country with services touching one in four patients.

Following VanBoening, MTMC President/CEO Doug Archer thanked the crowd that turned “to celebrate a pretty cool day,” and many by name who both played a part and partnered through the project. He gratefully acknowledged what has become a strong and dedicated partnership with MTMC Health Care District and its recently opened Valley Springs Health and Wellness Center and referred to development underway towards open another expanded health care office in Copperopolis at The Square at Copper Valley.

He ended his comments, passing the microphone to MTMC Clinics Medical Director Dr. John Krpan. A popular local physician who relocated his family from Alaska to the county back in 2002, Krpan shared of his nearly immediately forged friendship with Dalton and his enthusiasm now years later to serve among the primary care providers at the Dalton Medical Office.

You can hear some of their remarks by clicking the video link in the image box.

The Dalton Office, which quietly opened for business last week, is focusing on providing expanded primary and orthopedic care, features 16 exam rooms, a medications/injections room, and a procedure room for minor treatments equipped with a crash cart. There is dedicated space for telepsychiatry visits with an offsite specialist in tandem with an assigned nurse as well as appointments with local behavioral health care staff.

According to Clinic Operations Director Marina Bowlin, in addition to relocating the existing doctors and staff from the current clinic location at Angels Towne Center and other nearby offices, the new complex will offer at least two more primary care providers.

Incorporated into the facility’s design is a large multi-purpose room with a separate exterior entrance that can be locked off from the medical areas that will provide community event or conference space as well as serve as a staff break room.

To view event photos click into the image box slideshow.