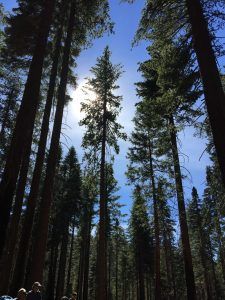 Sonora, CA – Steady progress amid national notice and glowing kudos were all heard during a status update to the Tuolumne County supes over a historic mutually beneficial local forest health partnership.

At Tuesday’s supervisors’ meeting, Senior Administrative Analyst and County OES Coordinator Liz Peterson led a slated presentation updating progress on various projects underway as part of the Master Stewardship Agreement (MSA) between the county and Stanislaus National Forest on behalf of the nonprofit collaborative Yosemite Stanislaus Solutions (YSS) of which the county is a member.

The agreement, signed just over two years ago, includes specific scope under Supplemental Project Agreements (or SPAs). These are chosen by consensus within the YSS collaborative.

Under the MSA provisions, Tuolumne River Trust (TRT) was brought on to oversee the various projects and make grant applications on the county’s behalf towards improving fire safety and community preparedness.

Since then, Peterson reports that in addition to what the Stanislaus National Forest has been able to do under its own independent work scope, TRT has helped bring in nearly $10 million in funding awards and managed efforts to additionally complete multiple projects activities ranging from timber harvests and fuels reduction to reforestation and prescribed burns across 10,000 acres of the Stanislaus National Forest.

Authorized by Congress in 2003 for the completion of mutually beneficial restoration activities on federally managed lands, MSAs involve cost-sharing of at least 20 percent by the jurisdiction, which TRT’s grant writing has so far been able to cover with a federal match of up to 80 percent.

Speaking his piece, Stanislaus National Forest Supervisor Jason Kuiken began, “The YSS collaborative in my humble view…is one of the most collaborative groups nationwide.” He shared, The county taking on MSA, which was built on a common vision of what a healthy forest is and how it improves all aspects of life within all the forested counties of California, has garnered interest far and wide on a national level with other collaborative partnering groups.

Thanking the board for “taking a chance on the Forest,” Kuiken added that by doing the work under the MSA the partners are increasing the pace and scale along with opportunities to continue having a bigger common impact.

Adding to glowing accolades between the partnering groups for each other, Supervisor Karl Rodefer commented. “It is fun to be on a team-leading the state and nation – YSS couldn’t do it without ‘em.”

Vice-Chair Ryan Campbell extended kudos to Peterson and emphasized the need to keep looking for more grant money, including for Kuiken, whose agency is responsible for trying to maintain what he estimated as about 4,000 miles of open road on the forest with about two-and-a-half percent of the county’s road maintenance budget.

Board Chair Sherri Brennan noted she and others are in active talks on the national level regarding resiliency and how a road budget is a piece of it “When we have our retreat, I believe this will surface as a priority,” she stated.

Brennan added that she heard of funding that was coming down the pipeline to Kuiken to help address that. He acknowledged his agency was getting about $2 million and partly to help further demonstrate how all the collaborative efforts, money, technological expertise and support come together to create more successful results.

While the current successes under the MSA exemplify how important collaborative work is to getting projects accomplished on the landscape, Brennan’s endnote stressed the future need to find other funding mechanisms outside of the granting realm that will sustain both new projects and maintenance activities.