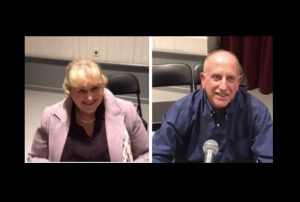 Update at 5:40pm: Candidate for supervisor David Goldemberg has responded to the allegations of making “defamatory and incorrect” statements about Tuolumne County Supervisor Sherri Brennan on social media, and has apologized for the “misunderstanding.”

He says, “Regarding the letter sent to me, it is nice to know that Sherri did not need any additional campaign funds in 2016 and returned the money to PG&E. The public records from PG&E reported a $750 donation for the Sherri Brennan 2016 campaign. Somehow the money was returned as noted in a later filing by PG&E. When I made my post, I was unaware Sherri Brennan had subsequently returned those funds to PG&E. As such, I apologize for my misunderstanding of not knowing the full circumstances of this donation.

I believe strongly every candidate for Supervisor should pledge to the voters of Tuolumne County that they will not accept any contributions from corporations and will put the interests of our people first.”

Original story posted at 9:39am: Sonora, CA — The campaign of District One Tuolumne County Supervisor Sherri Brennan is calling out a political Facebook post by challenger David Goldemberg as “defamatory and incorrect.”

The post goes on to state, “What else has Supervisor Brennan not reported as required?” He also includes a link to a PG&E website that lists candidates the company donated to in 2016, and Brennan’s name was listed.

The response letter from Brennan’s campaign counters, “You sir (Goldemberg) did not do your homework. Your libelous nature led you to make false, defamatory and incorrect statements. If you had checked ALL the facts, you would have seen that the check was never actually sent from PG&E, but was corrected and reversed. Sherri won the primary and had no need for further campaign funds. She did not accept the check; therefore, there was NOTHING to disclose.”

The letter from the Brennan campaign goes on to argue, “You need to make a public admission of this attempt to smear a seated County Supervisor. Defaming your opponent is not going to win the election. Your actions could be construed as more than a mistake on your part, but instead an attempt to slander another candidate to gain public favor. If, as you claim in your ads, you are honest, ethical and possess a high degree of integrity, you will make it clear that Supervisor Brennan has not withheld or failed to report anything at any time. You need to retract your posts from Facebook, and you should make a public apology for your incorrect and libelous attempt to mislead the public.”

The two campaigns have also sparred this election season about Brennan receiving the union endorsement of CAL Fire Local 2881.

Brennan is seeking a third term on the Tuolumne County Board of Supervisors. She is being challenged in District One by Goldemberg, a retired firefighter, and Jim Garaventa, the Mayor of Sonora. The primary election is March 3.