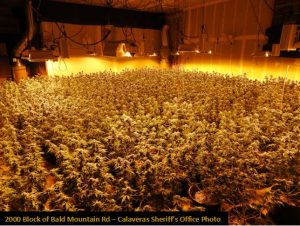 According to Sheriff’s spokesperson Sgt. Greg Stark, on Thursday the Marijuana Enforcement Team (MET) served a search warrant for suspected illegal marijuana cultivation at a West Point address located in the 2000 block of Bald Mountain Road.

The team located and eradicated 1,460 growing marijuana plants altogether weighing 440 pounds. Code enforcement officials were additionally called to investigate and red-tagged the structure for what was described as dangerous electrical modifications and structural changes. Deputies additionally discovered liquid waste discharging onto the ground in the vicinity of the shop building, which could later bring additional charges of environmental damage.

Contacted at the scene and placed under arrest was 36-year-old Zhong Li of West Point, who is charged with three felonies: illegal marijuana cultivation, possession of illegal marijuana for sale, and maintaining a drug house. According to Stark Li is being held in the Calaveras County Jail with a bail of $100,000.

Stark adds that evidence was collected at the scene for the ongoing investigation and that anyone with knowledge of the case or other illegal marijuana operations should report it on the Sheriff’s Anonymous Marijuana Tip Line at 209 754-6870.

Although Stark shares that variables used to provide rough street value estimates have been updated, Clarke Broadcasting has not yet received the latest values. Based on information last provided to us, the estimate was determined using one or more of the following values: between $1,300 and $2,000 per plant and half-pound of pot when from an indoor grow; $1,000 to $1,500 per plant and pot per pound yielding from greenhouses; $700 to $1,000 per plant and processed pot per pound from outdoor operations although larger plants may be valued higher.