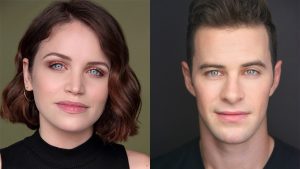 Sonora, CA – An actor with local roots will be making her Broadway debut this month, in a significant role to boot.

Lindsay Pearce, last seen last fall as Juliet in the Murphys Creek Theatre (MCT) production of Romeo & Juliet, was slated to direct the theatre’s June staging of Steel Magnolias. Instead, she has a newly inked ten-month contract to co-star in the Broadway production of WICKED at the Gershwin Theatre playing the green-skinned witch Elphaba.

The star-making role of the infamous witch was first notably played by Idina Menzel and before her, Stephanie J. Block in the first national tour.

The news officially broke nationally on Thursday that Pearce and actor Sam Gravitte (pictured with her in the image box photo), recently cast as Fiyero, now in rehearsals, will make their first appearance in the roles on Feb. 25. MCT officials say for Pearce it is definitely a dream come true and some are planning to attend her opening night performance.

Pearce, whose parents live in Sonora, was a runner-up on The Glee Project, which provided her a guest-starring role on the TV show Glee. An amateur show star since 13, she has appeared in stage productions since the age of 6.

Other regional credits include American Idiot, Spring Awakening, Bare: A Pop Opera (which won her Broadway World’s Best Leading Actress in a musical), The Last 5 Years, and For The Record: BAZ.

Among her other TV and film credits are “Recovery Road,” “Grey’s Anatomy,” and Sony Pictures’ The Wedding Ringer.