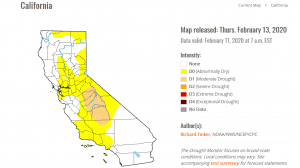 As you can see from the map, nearly half of the state is considered “abnormally dry,” but the areas that have moved into the “moderate drought” category include parts of Tuolumne, Mono, Mariposa, Fresno, Tulare, Kings and Merced counties.

It is the first time this calendar year that areas of California have been listed under a moderate drought, and there is no rain in the forecast over at least the next couple of weeks.

There is still a way to go before the region would move into a level of drought witnessed between 2012 to 2017. There are various levels of drought on the NOAA scale, starting at the lower end, moderate, then going to severe, extreme and exceptional.

The Department of Water Resources reports this morning that the Sierra Nevada snowpack is 59-percent of average for the date.

The US Drought Monitor notes that “moderate drought” indicates there could be some damage to crops and pastures. In addition, some streams, reservoirs and wells may be low.