2019 Was Second Busiest Ever In Yosemite National Park 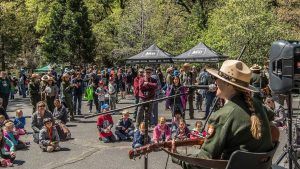 Yosemite, CA — New attendance figures have been released for Yosemite National Park, and 2019 was among the busiest on record.

Over 4.5-million people came through the gates last year.

Yosemite Spokesperson Jamie Richards says, “It was our second busiest year.  This tells us that visitors are still coming throughout California, and across the United States, and the world, to come and experience the wonder of Yosemite.”

The attendance was up by 400,000 from the year prior. Part of the dip in 2018 was likely related to the Ferguson Fire that impacted the park during the mid-summer months. In 2017 there were 4.4-million visitors, slightly fewer than last year, and the record was set in 2016 with 5.2-million visitors.

Richards says there is no hard data to indicate why last year was the second busiest on record.

It is possible that the peak year in 2016 was in relation to the National Park Service’s Centennial and numerous events taking place in recognition.  The park also received heightened media attention that year when President Barack Obama became the first sitting president in 50 years to visit the park.

Looking ahead, Richards adds, “Now is a great time to start planning your trips. Summer months are the busiest months, July and August.”

If you want to avoid large crowds, she recommends trying to come during midweek, or during the quieter “shoulder seasons” of March, April and May, or September, October and November.

To view the historical Yosemite statistics dating back to 1985, and which months see the most visitors, click here.