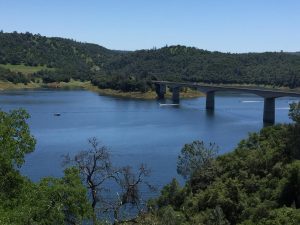 Angels Camp, CA — A California Triathlon, which could see up to 1,000 participants, is planned at New Melones this coming June, and the Angels Camp City Council will hear a presentation about it tonight.

The event is tentatively scheduled for Sunday, June 21. The organizer, USAP Events, hopes that it will become an annual event every Father’s Day. The swimming and running portions would take place at New Melones and the biking portion is set to run along Whittle Road through Angels Camp and along Murphys Grade Road. It would impact traffic in the area as pilot cars would escort the racers along the course.

The city council will hear an update at today’s 6pm meeting at the Angels Fire House and will have a chance to give input. The organizers estimate that 30-percent of the participants would camp at New Melones and the others would seek local lodging accommodations.

The group puts on similar triathlons in Half Moon Bay, Monterey, Morgan Hill, Oakland, Alameda and Folsom.
While the first year would be capped at 1,000 participants, the organizers hope that the number will expand in future years.