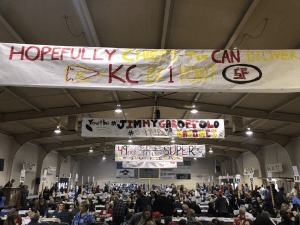 Sonora, CA — The proceeds have now been tallied, and the community stepped up to make the 2020 Frank Salel Super Bowl Breakfast a record-breaker.

After subtracting the costs of putting on the event (around $8,000) $30,096 was raised during the popular tradition held on Super Bowl Sunday at the Mother Lode Fairgrounds. Event Chair Scott Berry says it is the first time in the 34 year history that the $30,000 mark has been eclipsed. 1,250 breakfasts were served, which is up by about 200 from last year.

“It was just phenomenal,” reflects Berry. “Anytime the 49ers get in the Super Bowl it always helps pump up the numbers for us.”

The raffle was also a big success this year, raising over $10,000 alone.

In recent years a third cooking line has been added to help serve the made-to-order omelets as quickly as possible.

The money will be used to fund student scholarships, books and youth programs. The event is organized by the Sonora 49er Rotary Club.