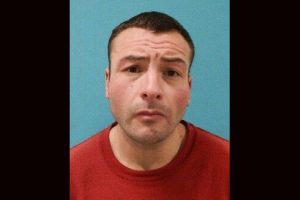 Sonora, CA – A Sonora man fought and spit on deputies as he was being arrested for making death threats.

A call to Tuolumne County Sheriff’s Dispatch reporting a man creating a disturbance that included yelling and threatening to kill people early Monday evening led to the arrest of 31-year-old David Encinias of Sonora. When deputies arrived at the residence on Argyle Road, they began questioning Encinias regarding the threats.

The person Encinias was yelling at alleged that he made threats to cause physical harm to the victim causing them to fear for their life worried he would act on his threats. Deputies determined that Encinias had made the threats, but when they tried to take him into custody he resisted.

Sheriff’s spokesperson Nicco Sandelin relays that Encinias resisted arrest by kicking, striking while spitting at deputies. It took a few minutes for deputies to get him restrained and headed to the County Jail where he was booked for criminal threats with intent to terrorize and resisting arrest on a $25,000 bail.