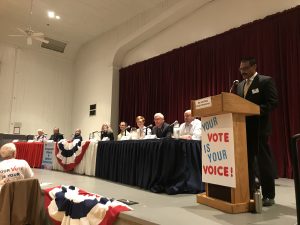 In the District One race, Brennan talked about her experience and some of the accomplishments in the county during her two terms. She spoke about a committee she leads focused on fire resiliency and the desire to “learn from our history and look ahead to the future.” Garaventa spoke about his time as a member of the Sonora City Council and currently serving as mayor. He referenced his 18 years of experience working with local government and non-profit boards to gain a strong background in fiscal and operational oversight. Goldemberg spoke about his long time career in the fire service, becoming a Captain in 1982, later a Battalion Chief, and eventually working with the state CAL Fire office. He helped oversee large budgets and worked with state lawmakers.

In District Four, Haff noted her background as a former Senior Analyst and Office of Emergency Services Coordinator for Tuolumne County. She has a background in facilitating strategic planning and bringing people together with diverse backgrounds to address problems. Renault, who works for the Sierra Conservation Center, spoke about personally overcoming homelessness, addiction and living in foster care. He has professionally helped collaborate and develop programs related to those issues, and assisted people in getting back on the right track.

In District Five, Brandon spoke about growing up in Tuolumne County, moving to the Bay Area, and later choosing to return to the county because of the community and its people. In doing so, he took a lesser paying job helping out his family business. He spoke of the need for more housing, better jobs, and government transparency. He was critical in stating, “Instead of building on our heritage, we’re building Dollar Generals.”  Rodefer spoke about his life experience, maturity, decisive judgement and positive relationships with county, state and national officials. He referenced the relationships being beneficial in the past fight against increased pulse flows out of New Melones Reservoir which could have significantly reduced the water levels. He also made fire resiliency his top issue while serving as chairman of the board in 2019. Suess noted his desire to give back to the community that has given he and his family so much. Jokingly, he thanked the principals and librarians who helped him when he was getting into trouble throughout his school life. He noted that he was a lead on the effort to build the Heaven for Kids Park, has served as a Director on the Sonora Chamber of Commerce, coached numerous teams, owns a small business, and last year was the Sheriff’s Posse Captain.

All of the candidates were asked the same questions by the moderator, Columbia College President, Dr. Santanu Bandyopadhyay.

In regards to their top priority, all eight noted that it was public safety.

There was a mix of responses to the question of whether the candidates support the local tax measures that will go before voters in March. One is to increase the Transient Occupancy Tax from the current 10-percent to 12-percent and the other is increasing the sales tax from 7.25-percent to 8.25-percent.

In District One, Brennan and Garaventa stated they support both measures, while Goldemberg said he supports the TOT increase but not the sales tax. Brennan cited a desire to keep the existing quality of life and law enforcement services. Garaventa stated that he helped lead a committee years ago to increase the sales tax in the city of Sonora, and it has allowed the city to maintain many critical services. Goldemberg said he would have preferred the sales tax be a 1/2 cent increase, and was critical of the county’s handling of existing revenues.

In District Four, Haff said she supports both measures with the caveat that there is long term planning done and the county does not come back again soon asking for more additional tax revenue. Renault did not specially answer yes or no, but criticized both tax measures, saying that the increased TOT rate would create challenges for members of the lodging industry. On the sales tax increase he is concerned that it only includes the unincorporated areas and disproportionately hurts those businesses (the Sonora City Council is not asking for an increase in the city limits).

In District Five, Rodefer said he hates taxes, but supports both because he sees the need for increased revenue. Brandon also supports both and he criticized the existing board of supervisors for not doing more to explain why the measures are being proposed. Suess said he is against the sales tax, because the county must learn to live within its means, but supports the TOT increase.

Another contentious question was in regards to the county’s path on marijuana, and whether commercial sales or cultivation should be allowed in the unincorporated areas. In District One, Goldemberg and Brennan both were critical of how the state rolled out its cannabis rules and regulations following the ballot measure that legalized the drug for recreational use. Brennan noted that the City of Sonora already has a dispensary for medical marijuana, and said the state needs to “get its act in order” before any additional actions should be reviewed by the county. Goldemberg expressed an openness regarding the topic, but said the state needs to figure out what it is doing. Garaventa said he believes the effects from marijuana are often less severe than alcohol, so the county should take a fresh, positive, look at the issue.

In District Four, Renault said he opposes commercial cannabis, and said there are questions about whether the health benefits of making the drug more readily available outweigh the negative impacts it can have. Haff stated that she supports “dispensaries only” because she knows friends and family who have had benefitted medically from the drug.

In District Five, Rodefer argued that the financial revenues received to the county from marijuana would be less than the cost to regulate it, so he opposes commercial grows. Brandon said he supports a new approach with the mindset of creating jobs and being pro-business. He also said the county needs to review the separate issue of hemp production. Suess told the story of recently learning of a sixth grader locally taking the drug to school so that it could be smoked in the bathroom, so he is opposed to commercial sales.

On the issue of homelessness, most all spoke about the need for community collaboration between the public, private, faith-based and non-profit groups, the need for more affordable housing and increased mental health services. They were also given time for opening and closing statements, and to talk about why they love the county.

There was a strong crowd on hand for the candidates forum. The primary election is coming up on the first Tuesday of March. If a supervisor candidate receives over 50-percent of the vote they will be declared the winner. However, if no candidate receives over 50-percent, then the top-two will move on to a November runoff election. The League of Women Voters put on the event, but it was also sponsored by the Sonora Area Foundation, Columbia College and Union Democrat.