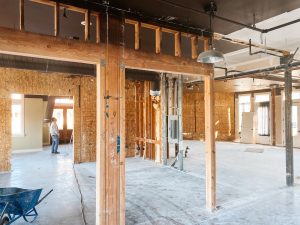 Copperopolis, CA – Stirrings that began just over a year ago under new ownership are simmering in and around the town square in Copperopolis.

Copper Valley LLC, which back in November of 2018 formally acquired a portfolio of properties formerly owned by developers Castle & Cooke, as reported here, broadly outlined plans to roll out a series of improvements before tackling their own development projects.

To date, the new owners have recast the golf resort formerly known as Saddle Creek to become The Golf Club at Copper Valley, bringing on Troon management to run it, and similarly renamed the residential community and town square in keeping with the Copper Valley or CV brand.

Within The Square at Copper Valley renovations have begun to convert the first floor of its landmark clock tower building into a hotel that will reportedly contain over two dozen rooms.

Dignity Health-Mark Twain Medical Center has also shared plans to relocate and expand its Copperopolis medical offices that are now located in Lake Tulloch Plaza. Hospital officials anticipate their new facility, which will be located a few doors down from The Tipsy Frog, might be ready to open sometime in June.

As far as housing goes, two more single-family housing developments are in the works; Copper Crest by the builder DeNova Homes featuring 1,422 to 1,490 square foot homes in the $300K range for which CV Properties is the selling broker; also Quail Creek with three model residences just breaking ground within the golf resort that are sized between 2,268 to 2,650 square feet although no pricing is yet available.

In the coming months, the owners indicate they will be moving forward with plans for condos and a warehouse district within The Square at Copper Valley footprint for which a broad range of zoning codes was approved under the previous ownership.