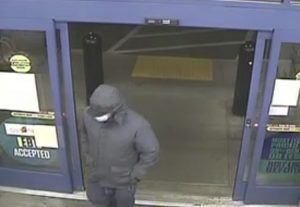 Original story posted 1-18-20 at 7:20am: Sonora, CA — The Sonora Police Department is investigating an armed robbery that was reported Friday evening at the 99-Cents Store on Mono Way.

At around 7:45pm a man walked into the store with what appeared to be a pistol and took cash from a drawer. The PD reports that he was wearing a blue surgical mask and a green/gray jacket. He was also wearing a black baseball cap, light blue cargo pants, tan work boots and brown/green gloves. The PD reports that he appeared to be a Hispanic male, 200 lbs., and 5’9-5’10.”

There were no injuries. The suspect is still at-large. He was last seen heading towards Trunkenmiller Road. The CHP and Tuolumne County Sheriff’s Office were issued a “be on the lookout” alert. Anyone with information about the robbery can contact the Sonora PD at 209-532-8141.