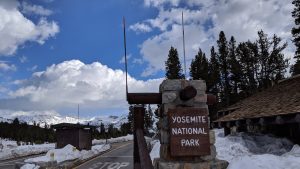 Yosemite, CA — Yosemite National Park is relaying an update about a spike in gastrointestinal illnesses reported in the park.

Yosemite spokesperson Scott Gediman says they have now received reports from 170 people. He adds, “Two of those are confirmed cases of norovirus. Most of the cases occurred on and around the first week of January and there has been a significant decline of new cases reported over the past several days.”

Gediman says park officials and medical professionals with the National Park Service Office of Public Health are continuing to investigate the circumstances surrounding the illnessness and are conducting interviews with affected people. The overwhelming majority of the reported cases are consistent with norovirus.

In order to avoid norovirus, people should wash hands frequently or use a hand sanitizer that contains at least 60-percent alcohol. Avoid sharing drinks and food, especially if you are sick. Also, if you start to experience illness, make sure to stay hydrated as much as possible.

If you recently visited Yosemite and would like to report a case of gastrointestinal illness, you can email yose_superintendent@nps.gov.