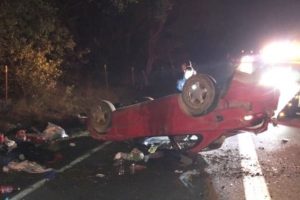 Jamestown, CA – A chase that began last night on Highway 108 in Jamestown did not last long as the driver lost control and crashed.

While on patrol a Tuolumne County Sheriff’s Deputy witnessed a little red car driving recklessly and attempted to pull it over, but the driver hit the gas. During the chase, the driver, later identified as 29-year-old George Sepulveda of Sonora, ran stop signs and passed other vehicles over double yellow lines.

The short chase ended when the vehicle overturned on Jamestown Road near Wigwam Road and came to rest on its roof, as the picture in the image box shows. The wreckage and debris were scatter all over the roadway blocking one lane.

A search of the vehicle uncovered 13 grams of methamphetamine and drug paraphernalia. Sepulveda suffered minor injuries in the collision. He was arrested for possible charges for possession and transportation of a controlled substance for sales, having drug paraphernalia, reckless driving and a whole host of traffic violations.