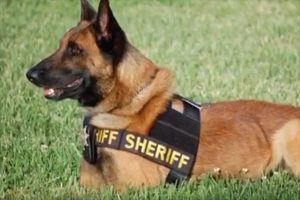 Sonora, CA – The Tuolumne County Sheriff’s Office (TCSO) is mourning the loss of one of its own that helped sniff out many drug busts.

10-year-old K9 Justice, a Belgian Malinois, is pictured in the image box. Sheriff’s officials put out a statement sharing, “It is with heavy hearts that we announce the passing of retired TCSO K9, Justice.” They also noted that his passing in December was due to medical conditions but was “unexpected”

Known for his “unmatched bravery, K9 Justice was awarded a Certificate of Recognition by the Tuolumne County Supervisor upon his retirement about two years ago, as reported here.

Justice thwarted many a crime including tracking a suspected car thief back in August of 2016 by sniffing the seat of the vehicle and leading deputies to the assailant, as detailed here. His nose also sniffed out plenty of narcotics, taking them off the streets, as reported here.

Born in January of 2009, Justice began his training in Little Rock, Arkansas and joined the TCSO force in April of 2010. During his career, he served with two handlers and retired to be a house dog with the first handler, Dan Grazioze.