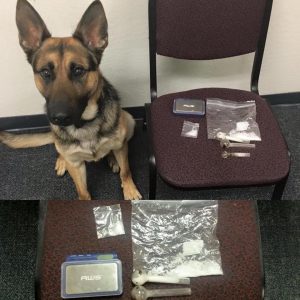 Jamestown, CA — A Sonora woman was jailed on felony drug charges and two companions were also booked following their arrest in Jamestown just before 1 a.m. this morning.

Following a search inside the 2001 Honda Civic, Sgt. Moss reports that a total of 18.41 grams of methamphetamine, a digital scale and three methamphetamine smoking-pipes were located. Arlene Peters, 45, of Sonora was booked into the Tuolumne County Jail for the transportation of methamphetamine for sale, possession of drug paraphernalia, the vehicle code violations. Currently, she is being held on a $20,000 bail.

Sgt. Moss adds, “James Nau, who was also in the vehicle, a 40-year old man from Sonora, was booked for possession of drug paraphernalia…Joseph McIntyre was also inside the vehicle — a 48-year-old male from Jamestown – was booked for possession of drug paraphernalia and a Calaveras County misdemeanor warrant.” She states that deputies released Nau and McIntyre after their booking with a court date.

In closing out her comments, Sgt. Moss notes, “Hans is doing an excellent job and we are fortunate to have him out there on the street, helping.” She says that it has been about a year now since Hans joined K9 Justice on the beat.