Bicyclist Rescued After Getting Lost Near Avery 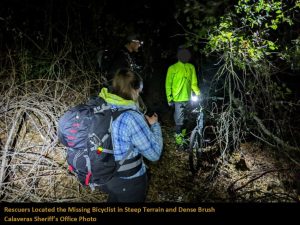 Avery, CA — The Calaveras County Sheriff’s Office, and CHP, helped rescue a man who became lost while traveling on the Arnold Rim Trail.

It happened New Year’s Eve at around 5pm. The Sheriff’s Office received a notification that the 66-year-old man was missing when he activated a personal emergency locater beacon. He was riding an electric mountain bike. Due to the thick brush and limited access points, the sheriff’s office requested a CHP helicopter respond. The crew overhead spotted the man at around 8pm, but was unable to land, and the canopy of dense trees prevented an airborne rescue.

Search and rescue officials responded on foot, through a mile of dense forest. Unfortunately, by the time they arrived, the man had decided to ride further down the mountain, and deeper into the forest. Later in the evening he was again located by helicopter, and escorted to his vehicle at 1:15am. He was in good health and needed no medical treatment.

Sgt. Greg Stark says, “The Sheriff’s Office would like to remind the public that motorized vehicles can travel farther on a trail in an hour than a person could walk in a day. In this case, the missing male was equipped with an emergency locator beacon but lacked other survival supplies. He continued to travel after realizing that he was lost and even after being instructed to remain in place by the helicopter.”

The Sheriff’s Office has the following safety tips:

• Take a partner whenever possible.
• Leave an itinerary with a friend, which includes your route and return time.
• Check the weather and conditions (including overnight temperature) and be prepared for them.
• Stay on the trail.
• Pack the ten essentials (First Aid, Map/Compass/GPS, and Sun & Rain
Protection, Flashlight, Fire Starters, Repair Kit/Tools for any vehicle or equipment, Food, Water & Shelter.
• As soon as y ou realize you may be lost: stop, stay calm, stay put. Panic is your greatest
enemy.
• If you become lost and are given instruction by any emergency personnel or emergency
dispatch, follow all instructions and wait for any additional instructions.