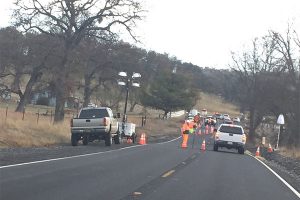 Angels Camp, CA—Caltrans crews spent Friday assessing the damage to a bridge on Highway 4 in Angels Camp after a pickup crashed into it reducing traffic to one lane, which will last through the weekend and possibly longer.

The CHP reports the wreck actually happened on Thursday morning when driver, 68-year-old Michael Marino of Arnold, was heading westbound on the highway near Appaloosa Way and lost control of the vehicle. Sgt. Jennifer Hannum details, “He ended up making an unsafe turning movement to the right. The vehicle left the roadway and once that happened it hit the wooden bridge and the officers on the scene determined that the bridge ways damaged.” Marino was not injured in the collision.

Caltrans was called in to determine the safety of the bridge. Caltrans spokesperson Rick Estrada advises, “It’s a safe bridge right now. There’s not a problem with traffic going across it. We just have it down to one lane while we finish our inspection.”

The one-way traffic will continue all weekend long as it was a steel girder that was damaged. The main concern according to Estrada, “They [road crews] have to take a good look at that and see if it can be repaired and that could take a couple of days. If it must be replaced, then it’s got to be ordered and it will take several days to get here and that’s more of an open-ended window.”

Temporary traffic signals are in place to coordinate the one-way traffic over the bridge. Motorists can expect up to 30-minute delays. Estrada says a final decision on the severity of the damage will not come until Monday. He adds, “With increased travel due to the weekend and the upcoming holidays, travelers are strongly advised to seek alternate routes like Pool Station Road and Highway 49.”