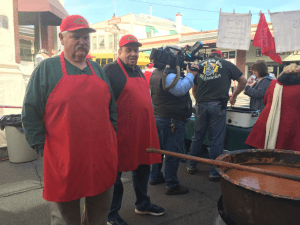 Founded by local resident Galen “Mutz” Mutzner, now a spry and still bright-eyed 93, the event led off with his ringing of a big bell just before high noon. Bean feeds past have certainly come replete with seasonably cold, sometimes wet weather. However, conditions this year, even with winter set to officially arrive Saturday night at 8:19 p.m. Pacific Time, seemed like a gift.

Turnout for the event, which was thankfully taken over by the Tuolumne County Sportsmen club last year when Mutz decided it was time to pass on the ladle and bean pot, was in the customary hundreds.

The line just before 12 p.m. was nearly back to the Sonora Inn past Coffill Park with many festively decked out in Santa hats and “ugly” sweaters. Sidewalk conversations were merry with neighborly chatting and Christmas greetings.

Bill Morales, Rudy White and other club organizers, who showed up before 5 a.m. for setup and to fire up the beans recounted how much in the way of ingredients and preparations went into this year’s recipe (to hear and see a street scene video, click the link in the image box, where there is also a slideshow).

They estimate the shindig took about 20 helpers, further aided by an additional 15 last-minute volunteers who rolled up their sleeves and joined Santa Claus on the serving line or behind the scenes preparing and grilling tortillas and garlic bread.

Sonora Police Chief Turu VanderWiel took a turn ringing the bell at the Salvation Army holiday collections pot while greeting and talking with folks as they enjoyed their beans and sides.

Clarke Broadcasting caught up with Mutz inside The Sportsman Bar, having a beer with friends before heading outside to sample the beans. While he had not yet had a bite, the consensus was that this year’s batch was not chewy at all, as some folks last year opined.

In fact, by the comments and smiles, it appears that this holiday season’s Bean Feed recipe came out quite good indeed, providing all who turned out a savory start to the long holiday weekend ahead.