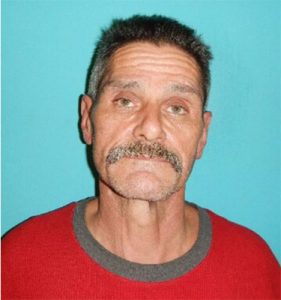 Sonora, CA – A high-speed chase wound through Tuolumne County ended with flat tires and Clarke Broadcasting has learned that the vehicle could be linked to a recent stabbing in Tuolumne.

The chase began around 1 a.m. on Wednesday with a Tuolumne County Sheriff’s Deputy trying to pull over a green Chevy pickup speeding on Tuolumne Road near Summerville High School. CHP officers took over the pursuit southbound on Big Hill Road at Five Mile Creek Road. The chase lasted for about 25 minutes and covered over 30 miles as the driver, 55-year-old Dean Ray Bennett of Soulsbyville, raced over 70 mph while blowing through stop signs and crossing into oncoming traffic.

CHP spokesperson Steve Machado details how the truck was stopped, stating, “A California Highway Patrol sergeant was able to successfully deploy a tire deflation device also known as a spike strip on Washington Street, just west of Highway 108. Bennett continued to drive his vehicle until it came disabled on a private residence on Cedar Road in Sonora.” Bennett was subsequently arrested without incident.

After the conclusion of the pursuit, it was determined that the vehicle was associated with a person of interest in a recent stabbing in Tuolumne, which details have not been publicly released as it is actively being investigated. Tuolumne County Sheriff’s spokesperson Nicco Sandelin tells us the stabbing happened around 4 a.m. on Wednesday, December 11th at a home on Lavell Drive.

While he would not reveal what led up to the stabbing, he described the victim as, “It was one white male adult, 41-years-old. It was in the chest area.” He continued, “We don’t have anybody in custody in regard to that incident at this time.”

Sandelin adds that it is not Bennett’s truck and he was not the individual being sought for questioning in the stabbing incident. Additionally, he does not know the condition of the stabbing victim and that person’s name is not being released due to the ongoing investigation.

Bennett assigned a $90,000 bail after being arrested for a felony charge of evading a peace officer with wanton disregard for safety and a misdemeanor charge of driving without a license. He also had outstanding warrants related to failure to appear in court, carrying a concealed dirk or dagger with an enhancement for being a habitual offender.  Of note, Bennett was also arrested in October of last year for allegedly threating patrons at the Loggers Club near Tuolumne Memorial Park with a gun, as reported here.

Anyone with information related to the stabbing is asked to contact sheriff’s detectives at 209-533-5855.