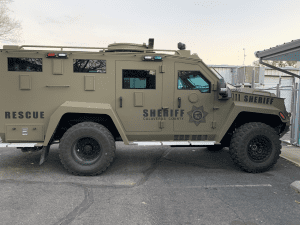 San Andreas, CA — The Calaveras County Sheriff’s Office has a new tool that can be used for things like search and rescue, hostage situations and active shooter incidents.

About two months ago the sheriff’s office added a $328,000 BearCat armored rescue vehicle.

Sheriff Rick DiBasilio says much of the funding came via AB 443, non-discretionary money to law enforcement agencies, along with a $50,000 donation from the non-profit Friends of the Calaveras Sheriff’s Office. DiBasilio stresses there were no general fund dollars used.

As for the benefits, “We can get the vehicle right up to any area and keep the deputies safe inside the vehicle. It will be a huge asset to keep people safe.”

DiBasilio says it was already put into work during a recent SWAT mission.

It is a brand new vehicle built on a heavy-duty commercial truck platform which will allow upkeep and repairs to be done by the department mechanic. He adds, “I’ve been with the sheriff’s office for 17 years, and we had one (armored vehicle) that was an army surplus vehicle, but it was from the eighties, it was outdated and had no power. You couldn’t put a lot of people in it. This unit, we could probably put 12 people inside if we needed to.”

Anyone interested in seeing the vehicle can stop by the Sheriff’s Office building in San Andreas on December 23 from 11am-1pm.

We reported that Tuolumne County received a BearCat in 2015. Click here to find the earlier story.