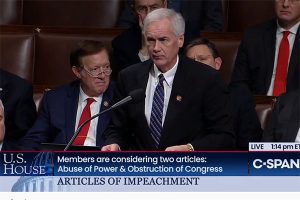 You can hear the speech as part of this morning’s Newsmaker of the Day segment on AM 1450 and FM 102.7 KVML.

McClintock outlined how the two Articles of Impeachment are “made up crimes.” He continued, stating, “Any case that charged no actual crime and offered no legally admissible evidence would be laughed out of court in a heartbeat.”

The congressman’s entire remarks can be viewed below:

Speech in Opposition to the Impeachment of the President

Nullifying a national election requires an overwhelming case of high crimes, supported by indisputable evidence that the vast majority of the nation finds compelling.

Article I is a made-up crime called “abuse of office.”  It does not charge the President broke any law, but rather that Congress doesn’t like the way he lawfully discharged his constitutional duties.  This would reduce the Presidency to that of a minister serving at the pleasure of Congress, destroying the separation of powers at the heart of our Constitution.

Article II is another made-up crime called “obstruction of Congress.”  It means the President sought to defend his constitutional rights and those of his office.  This removes the Judiciary from our Constitution and places Congress alone in the position of defining the limits of its own powers relative to the President.

Our Bill of Rights guarantees every American the right to confront their accuser, to call witnesses in their defense, to be protected from hearsay and to defend these rights in court.  The Democrats have trampled them all in their stampede to impeach.

Any case that charged no actual crime and offered no legally admissible evidence would be laughed out of court in a heartbeat.  That is the case before us today.  It would redefine the grounds for impeachment in such a way that assures it will become a constant presence in our national life.

Now we know just how reckless is the Democrats’ chant of “Resist by ANY means necessary.”  This is a stunning abuse of power and a shameless travesty of justice that will stain the reputations of those responsible for generations to come.