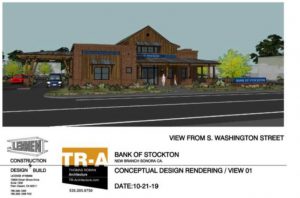 Sonora, CA — The Sonora City Council will hear an appeal Monday about a plan for a new Bank of Stockton to be built at 549 South Washington Street.

We reported earlier that the Sonora Planning Commission approved a design review permit and site plan for the 3,500 square ft. facility, but it was appealed by the Tuolumne Heritage Committee and local nearby business Sun Waelty. In the Tuolumne Heritage Committee Appeal, filed by Sharon Marovich, it argues that the design is inconsistent with certain General Plan policies and the design does not mesh with the historic district.

A report issued by Interim City Administrator Rachelle Kellogg indicates that efforts were made by the business prior to the planning commission approval to help ensure the new building fits into the historic downtown district. She says, “Comments were received from the Tuolumne Heritage Committee and the applicant reached out to Sharon Marovich to discuss her concerns. Based on this discussion, the applicant made further changes to the building design prior to submitting it for Planning Commission consideration. The approved design includes both brick and wood with accents, and does incorporate historic design features found in the area. The proposed building design also includes elements to visually reduce and soften the building mass while still providing the size necessary for its commercial use.”

Meanwhile, the Sun Waelty appeal asks that the inlet on Lytton Street be eliminated from the plan out of concerns that it will reduce the amount of parking on the street.

The City Council will review the appeals at Monday’s meeting that begins at 5pm at Sonora City Hall.