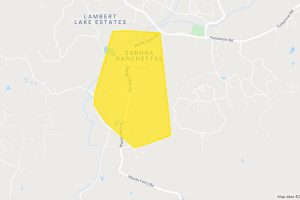 Update at 7:25 p.m.;  One person has been arrested for DUI in connection with this collision. The CHP reports that it was the driver of a 2010 Jeep Wrangler, but they are not releasing the man’s name at this time. The Jeep sheared two power polls bringing them along with live lines down across the Wards Ferry and Tinnin roads intersection, closing it. The Jeep ended up in a ditch, but a female driver of a Ford F250 pickup that slammed on her brakes to avoid a collision was trapped inside the truck after live lines came to rest on its side mirror. The CHP reports the wires were removed in about 30 minutes and she was allowed to leave the scene as no injuries are reported in the crash.

The CHP hopes to have the intersection reopened within the hour. PG&E is reporting 257 customers in the area are without power and gives an 8:45 p.m. estimated restoration.

Update at 6:30 p.m.: The CHP reports a PG&E crew is on the scene of a collision where a woman is trapped inside her vehicle due to live lines on it has been freed. An ambulance was called to the scene but there is no word on injuries at this time. Further details on the crash and power outage can be viewed below.

Original post at 6:10 p.m.: Sonora, CA — First responders are on the scene of a collision that has sparked a power outage in Sonora impacting several hundred PG&E customers.

The CHP reports the crash happened at the Wards Ferry and Tinnin roads intersection. A vehicle has smashed into two power poles, shearing them at the base and bringing them crashing down onto the roadway. Live powerlines have ended up on the mirror of a passing vehicle that had stopped as well as running about 600 feet down and across Tinnin Road, according to the CHP. The female driver inside cannot be removed until a PG&E crew makes it to the accident site. Additionally, an ambulance has been called to the scene.

The outage is impacting 257 customers along both roadways aforementioned and stretching from Uplands Drive to Tuolumne Road. The utility relays that a crew is headed to the site, but no estimated arrival time has been relayed. The company also has posted an 8:45 p.m. power restoration time.