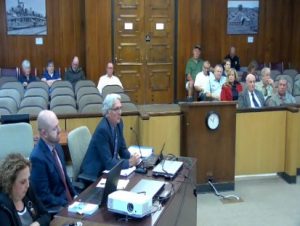 San Andreas, CA — It has been about 13 years in the making, and today the Calaveras County Supervisors approved a General Plan Update.

The supervisors held two days of public hearings in late July, and over recent months staff has been working behind the scenes to make some final changes. Peter Maurer, the county’s Planning Director, noted that this is a historic day, and referred to it as a “document of compromise.”

A handful of people came up and voiced some concerns about the plan, and the supervisors noted that some details regarding specific community plans, and properties, may be addressed in future General Plan amendments. The board indicated a consensus that it be reviewed and changed more periodically than previous general plans.

Details on the General Plan Update can be found here.

All of the supervisors voiced praise in getting the document to this point.

Supervisor Merita Callaway called it a “balancing act of interests.”

Board Chair Jack Garamendi argued that it was important to find a compromise, and expressed a hope that the plan will not draw any lawsuits. He noted that legal challenges could hinder the general welfare of the county and its citizens.

He stated, “I would ask that these people look at the aggregate good of the general plan update. In a democracy we must make compromises and work to improve the document through dialogue and understanding and not through useless litigation that in the end is only going to benefit the attorneys.”

The plan was approved with a 5-0 vote.