New ‘Jaws Of Life’ Equipment To Cut Rescue Time In Half 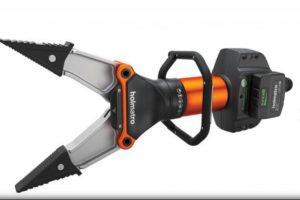 Picture similar to the spreader being purchased by Sonora Fire Department

Sonora, CA – With every minute counting after an accident, a state grant will allow the Sonora Fire Department to upgrade its rescue equipment and hopefully save more lives.

The $35,000.00 grant from the California Office of Traffic Safety (OTS) is slated for new extrication equipment also known as the “Jaws of Life” and other lifesaving rescue tools. With that money Fire Chief Amiee New relays, “We’re able to get a cutter that will cut open the vehicle. A spreader that will help us pop doors open and helps us roll the dashboard up off victims along with a ram that will do the same thing.”

The department’s current rescue equipment is from the early ’90s and it requires a heavy generator to be unloaded from a truck. It is also cumbersome with some of the equipment weighing upwards of 75 pounds and hooked up to hydraulic hoses that then must be dragged to the wreckage site. The new equipment, which similar types can be viewed in the image box, is described by Chief New, “It is battery operated. So, it’s opening up a cabinet pulling a tool out an going right to the car. So, we’re hoping it will cut are extrication time in half of trying to get patients out, which is going to give them a better chance of survival if they have major injuries.”

Noting that delays in extrication can negatively affect what is referred to as the patient’s critical “golden hour” of trauma survivability, Chief New provides this list of the core principle of rapid intervention in trauma cases:

The new equipment is expected to arrive by the end of November or early December, according to Chief New. She adds that a public open house is in the works to showcase the equipment, but a date has not yet been determined.