Update: Fire Along HWY 108 In Sonora 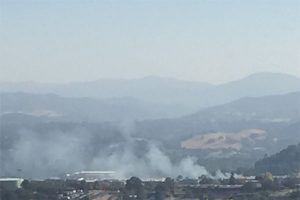 Update at 3:45 p.m.: Cal Fire spokesperson Emily Kilgore tells Clarke Broadcasting that crews have stopped the flame’s forward rate of spread at a quarter acre and gain 50 percent containment on the Loop Fire. It broke out around 3:15 along Highway 108 behind the Lowe’s Store in Sonora. Kilgore relays the flames were climbing the hill behind the store. Old Wards Ferry Road was shut down between the Lowe’s and Walmart store to the highway but just reopened to traffic. Crews will remain on scene working towards full containment and mopping up for the next couple of hours. The cause of the blaze has not been determined.

For those taking Tuolumne County Transit buses, while they are still running the fire has slowed traffic and some buses will be delayed, according to transit officials.

Original post at 15:30 p.m.: Sonora, CA — A column of smoke can be seen rising along Highway 108 behind the Lowe’s Store in Sonora.

Columbia aircraft and ground crews are responding. CAL Fire reports that the flames are behind the store. There are no further details on the blaze at this time. The CHP is reporting the closure of Old Wards Ferry Road between Lowe’s and Walmart stores. Updates will be made as soon as further details come into the newsroom.