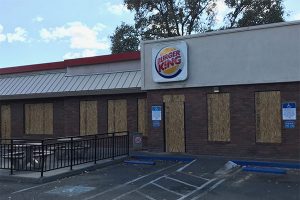 East Sonora, CA – No longer the ‘Home of the Whopper’ as customers are finding a boarded-up Burger King on Mono Way in East Sonora.

As the pictures in the image box shows, the drive-thru has a closed sign posted and the menu board has been removed. Several attempts to call the fast-food restaurant have resulted in no answers, just endless ringing.

Hoping to learn why the eatery was closed, Clarke Broadcasting tried another approach and contacted the Tuolumne County Community Resource Agency Development Office to see if any plans had been submitted for the property. The answer was no and officials there had no further information regarding the closure. We then checked with the county’s public health department to see if they had a hand in the closure, but none of our calls or emails were returned.

Finally, we tried to contact the fast-food restaurant’s cooperate headquarters in Miami, Florida. A voice message left for Heitor Goncalves the Chief Information, Performance and People Officer went unanswered. However, we did learn that in May the restaurant chain announced that it would be closing 200-250 low volume locations across the country as operator franchise agreements become due. The company also plans to add numerous rebranded “Burger King of Tomorrow” sites across the country. There is no word on what will happen to the Sonora site.