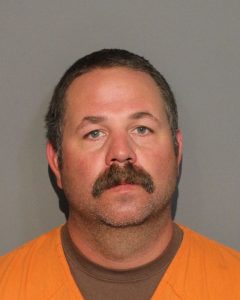 “The Board expresses its deep sympathies. Al Alt was the victim of a senseless, violent attack,” Garamendi comments, adding that the CAO is continuing to work remotely this week while recovering from his injuries. “We anticipate and look forward to his return as soon as he is able.”

Original Post at 2:12pm: San Andreas, CA – Calaveras County sheriff’s officials have released limited details of a serious battery that led to the arrest of a local man.

Sheriff’s spokesperson Sgt. Greg Stark reports that deputies arrested 38-year-old Valley Springs resident Benjamin Robitaille as he was leaving his residence, transporting him to the county jail on Sunday night.

There, he was booked for felony assault with a deadly weapon not a firearm, including with serious bodily injury, and for serious battery. Assigned a $110,000 bail, he was released after posting bond

Clarke Broadcasting heard word that Calaveras County Chief Administrative Officer Al Alt, a Valley Springs area resident, was injured at a public place over the weekend, and queried Stark, who confirmed that it was the same incident.

He shares that the attack occurred Saturday at The Range Bar & Grill. Arriving deputies for a report of a physical fight found a male who had been the victim of a serious, violent battery.

“Due to the extent of the victim’s injuries he was taken to a Valley hospital for emergency medical attention,” Stark recounts. He adds that investigators dispatched to the scene collected physical evidence, conducted interviews, and reviewed surveillance video throughout the following day before contacting and arresting Robitaille the following evening.

As the case remains an active one, Stark says investigators continue to review the evidence and consider the possibility of any motive or precipitating events that could have led up to the attack, and that the district attorney’s office is being made aware of currently existing and potentially additional charges. It is unknown at this time whether Robitaille knew Alt or of his position with the county.

Clarke Broadcasting has reached out to county government officials for word about Alt’s condition.