Two Arrested, One Still Being Sought, For Death Of Jamestown Man 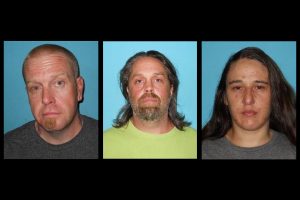 Tuolumne, CA — The Tuolumne County Sheriff’s Office has arrested two people in connection to the death of 44-year-old Jeremy Allen, who was found dead in June in the Stanislaus National Forest off Buchanan Mine Road.

Allen was declared a missing person on May 22, and a day later his pickup truck was found hidden under a tarp in the area of Fir Drive and Mountain View Road in the Sonora area.

Sgt. Benson adds, “Allen’s cause of death was due to mixed drug intoxication. During the medical emergency, Pierce, Cole, and 29-year-old Annastasia White of Jamestown failed to provide him help. The three had multiple opportunities to get Allen to a medical facility or call 911. After Allen died, Pierce and Cole dropped him off on a remote forest road…Pierce and Cole then went to Allen’s home and stole his truck and personal property.”

Anyone knowing the whereabouts of the third suspect, White, is asked to call the sheriff’s office at 209-533-5815.

Sgt. Benson adds, “This tragedy could have been prevented. The suspects could have helped Allen without facing criminal drug charges. The Good Samaritan Law provides basic legal protection for anyone who helps others in distress or danger.”