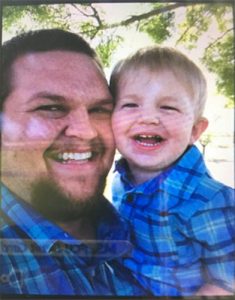 Sonora, CA — An “Amber Alert” has been issued for the Mother Lode from Merced CHP asking for the public’s help to find a boy allegedly abducted by his father.

The CHP warns that the father, 32-year-old Steven Weir, is considered armed and dangerous. The father and son, 2-year-old John Weir, were last seen together on Friday, Sept. 20 at 7 p.m. in Merced. Take a look at the pictures in the image box of two and Weir’s car, a red 2005 Hyundai Elantra with license plate 5SKT544. The “Be-on-the-Lookout” (BOL)  has been issued to include Tuolumne, Calaveras and Mariposa counties. The CHP relays recent pings on Weir’s cell phone links him to the Mother Lode area.

Anyone who may have seen the pair or the car or may information regarding Weir is asked to call 911.