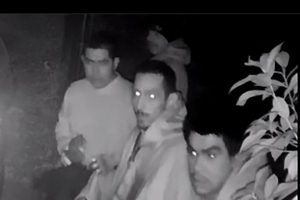 Suspects being sought in the Haxy Bulldog Farms cannabis dispensary

Sonora, CA – Sonora Police are hoping the photos in the image box will lead to the arrest of the suspects who broke into and ransacked a medical cannabis dispensary in Sonora.

Police worry the marijuana might end up in the wrong hands, particularly kids, and that could be very dangerous. Detectives are asking for the public to view the photos taken by security cameras during the burglary last Wednesday (Sept. 11) at around 4 a.m. Police report the suspects, one wearing a plastic face mask, used a pry bar to bust open a locked door at the Hazy Bulldog Farms cannabis dispensary, located at 1243 Mono Way near Sanguinetti Road.

Police Dispatcher Debbie Dills tells Clarke Broadcasting, “Four unknown males stole a large amount of marijuana product. They also caused approximately $5,000 worth of damage to the store during the break-in.”

The suspects were gone when officers arrived on the scene, but the pictures show the destruction they left behind. Police relay that the owner puts the loss of cannabis and products at over $69,000. The getaway vehicle, believed to be a 2015 or 2016 Honda CR-V with paper dealer plates, can also be seen in one of the photos. Anyone recognizing a suspect or who may have information on the heist is asked to call the Sonora Police Department at 209-532-8141.