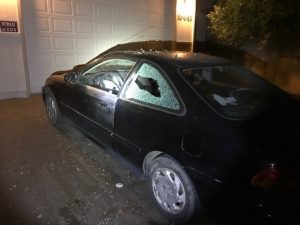 Upon their arrival, they learned 23-year-old Meghan Martinez and 24-year-old Brittany Williams, both Groveland residents, had kicked open the front door to the home and allegedly caused several thousand dollars in damage inside.

Benson recounts that deputies saw holes in the walls, broken lights, broken mirrors, and glass all over the floor. Additionally, two vehicles parked outside had been vandalized.

As officials were investigating, they noticed two women in a silver Toyota Corolla drive by the home several times and subsequently pulled the vehicle over near the intersection of Pleasant View Drive and Dunn Court. Benson says that Martinez and Williams were inside along with a man and two children.

The women were arrested and booked into the Tuolumne County Jail on the related charges and assigned $50,000 bails. Martinez was additionally booked on a Mariposa County warrant for driving without a license and proof of insurance. The children were released at the scene to family members.