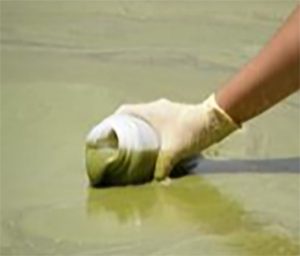 San Andreas, CA – After the state tested for algae blooms carrying potential toxins in New Melones last month, just in time for the Labor Day weekend, and found low levels — a local water district is not taking any chances.

A blue-green algae bloom was first spotted in New Hogan Reservoir in June, as reported here. A month later, the state sent out a caution advisory to the public after cyanobacteria was found in the Middle Fork of the Stanislaus River upstream of New Melones Lake,  as relayed here. After that came the pre-Labor Day results mentioned above, as detailed here. That prompted Calaveras County Water District to do some testing of its own.

Water samples were collected in all rivers, lakes and reservoirs that supply drinking water to customers. The specimens were then sent to a lab for analysis. The results — all test samples came back negative for harmful algal blooms (HABs).

So is the water safe to drink? CCWD spokesperson Joel Metzger insists, “Yes, it is safe because one we’re testing. Two, even if an alga bloom somehow got into one of our treatment plants, we have advanced treatment technology. In almost every case it’s going to be able to remove that harmful algae bloom before it goes out into homes.”

Metzger adds that water boiling is not necessary, stating, “This is something that the state and that CCWD is keeping a close eye on so, they [customers] can rest assured that we’re watching it very closely.”

The district also tested its treated wastewater storage pond on Sandalwood Drive in Forest Meadows with negative results for HAB’s. Even so, Metzger shares that CCWD is removing the algae from the pond as a precautionary measure. Regarding whether further testing will be done, he says that the district will be monitoring the situation and decided on a case by case basis.

For precautionary measures when dealing with algae bloom or to report blooms, click here.