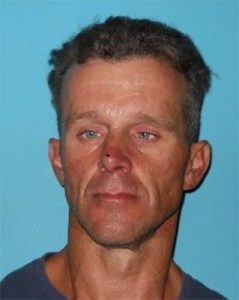 Sonora, CA – Already arrested after numerous guns were found at his home last year while on probation, a Sonora man landed behind bars again — this time for having ammunition.

Tuolumne County Sheriff’s High-Risk Supervision Team conducted a compliance check at the home of 44-year-old Richard Klidies on Fortuna Mine Road in Sonora recently as he is a convicted felon on searchable probation. Klidies is also currently out on bail from a previous case involving felony charges. Those stem from a March 2018 arrest when an array of weapons, including an assault rifle, were uncovered in another compliance check, as reported here along with pictures of the guns. That incident resulted in Klidies’ arrest as he was already on a felony probation violation hold for carrying a loaded firearm in public.

This time, during a probation search of Klidies’ home, numerous rounds of ammunition were found in a bucket. He is not allowed to have any bullets or magazines due to that prior felony conviction.

Klidies was arrested and booked into the Tuolumne County Jail for a prohibited person owning or possessing ammunition and committing a felony while out on bail. His new bail was set at $20,000.